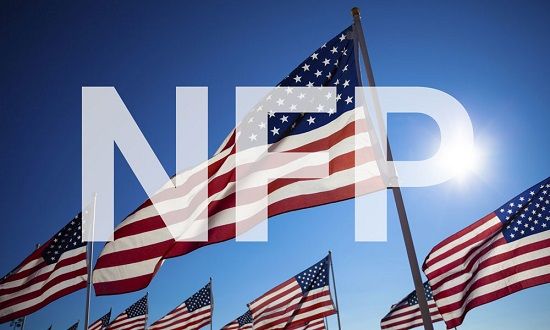 Non-Farm Payroll (NFP), also known as the non-farm employment change, is an economic indicator which measures jobs added in the previous month. Farming related jobs are excluded because they tend to be seasonal in comparison to other general employment categories.

Some employees of the government and non-profit organisations and privet households are also excluded from the report. This statistic is released on the first Friday of each month by the United States Department of Labour.

NFP is one of the main indicators used to evaluate the overall economic health of the country, given that more jobs mean additional consumer spending. Therefore, an increase in jobs may indicate an increase in inflation, while the converse may indicate a slowing economy. That’s why the Fed pays close attention to the employment indicator.

The NFP report includes a lot of important data on the labour market and has a direct impact on stocks and the value of the US dollar, as well as on gold prices. The total non-farm payroll accounts make up approximately 80% of the workers who produce the entire US gross domestic production (GDP). It also shows statistics of the unemployment rate in the labour market, in addition to the participation rate.

Furthermore, the report contains additional items such as average hourly earnings and the wage growth rate. Each month’s report may include revisions to the previous reports.

The US employment report for April will hit the markets at 12:30 GMT today and will reveal just how much economic damage the pandemic has inflicted on the American economy. This data is significant and is one of the key fundamentals for the Fed to determine the new course of monetary policy.

Previously, the US job report from March showed just the beginning of the tremendous damage inflicted by COVID-19 on the labour market, showing losses of 701 000 jobs. This followed the February reading which came above the levels of 200 000. For April readings, forecasts point to an incredible 21.8 million job losses, which would push the unemployment rate up to a staggering 16%. As for the dollar, economic data has little impact nowadays, so its near-term direction may depend on risk appetite. Overall, it’s still difficult to envision any real weakness in the reserve currency.

If expectations prove to be accurate today, then the US will have lost every job created over the entire past decade and the unemployment rate will hit its highest level since World War II, far surpassing the 10% peak of the global financial crisis in 2008.

Things could be even more terrifying given that this jobs survey was conducted in the 2nd week of April, and since then, the number of unemployment claims has remained alarmingly high. Consequently, the employment rate could probably be even higher today with additional job losses expected next month.

Another important issue is the wage rates which have slowed down over the last three months since the spread of COVID-19 in the US.

Another statistic worth noting is the labour force participation rate. People who are not working and who don’t meet the criteria to be counted as unemployed for the headline unemployment rate are not considered part of the labour force. This category includes students, retirees, and those who stay home to take care of family members. In addition, people who report wanting a job but have not looked for work in the most recent four weeks are not considered part of the labour force and are ignored in the official statistics. This is important because the unemployment rate could be artificially deflated.

With previous important data being ignored, does NFP even matter?

Lately, we have seen very little market movement even after the release of horrific data. The markets didn’t care when weekly unemployment claims showed millions of Americans being laid off, and there was not much movement when US GDP contracted by more than expected in Q1, so this NFP could be just another piece of bad news that everyone expects.

Ultimately, at some point in the future, the markets will start once again to care about data. Once traders pass the stage of “expected bloodbath” and enter the phase of “recovery expectations,” then markets could return to a macro mood. In other words, data may start to matter only when the lockdowns are lifted, and investors begin to focus on which economies are coming out of the recession first.

Important data that may have a direct or indirect impact on the NFP report that will be released today:

Worse than expected readings, reaching more than the 25m-30m million job losses, could push the unemployment rate up to more than 17-20%. This may strongly support the USD and push it higher against many currencies. The EURUSD is expected to break through the $1.0720 support level and may plummet further towards $1.0650 levels. This also could reflect on gold upwards and make bulls takes control and a breach above $1750 pushing the yellow metal towards $1800 handle.

The reading of the index stays within the expected range of 20-21 million jobs in May, which would push the unemployment rate up to a staggering 16% with wage rates dropping by 0.1%. This scenario will also support the USD and make it hold up. For instance, the EURUSD is expected to break through the $1.0720 support while also shares get tanked and gold to be lifted above the $1730

This is the least pessimistic scenario, with May readings coming below expectations or below the level 20m jobs around 16m jobs or even less. This scenario will have a more negative effect on the USD and will push it to retreat significantly against its rivals, especially the euro, possibly returning to the levels of $1.0890, which is a strong resistance level for the pair. While gold could stay within limited ranges as it still negative reading.

We’re more inclined towards the second scenario which suggests that the index will stay around of (20m +/-) jobs lost in May, which would push the unemployment rate up to a staggering 16%. This data will be crucial before the fed mid-month meeting. Negative data would be an indication to the Fed to apply additional aggressive QE measures. With the United States losing almost all the jobs created during the post-global financial growth period, the official NFP could tank stocks and boost the dollar. These are horrible figures, which will only worsen with revisions for May. Even with the reopening of some states, May will probably culminate in additional job losses.