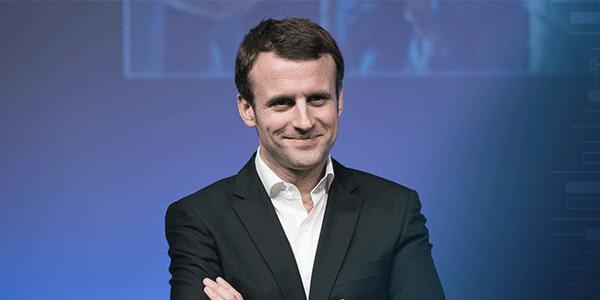 Three years ago he was a political unknown in France. Six months ago he resigned as Minister of the Economy to launch his own political movement - En Marche! (Forward!) and ran his first presidential campaign as an independent candidate. Over the past five years Macron progressed from being chief advisor to the former president Francois Hollande to becoming France’s youngest president at the age of 39. So who is Emmanuel Macron?

“He represents himself as a centrist.”

Macron presents himself as an ideological centrist and is a model of the educated class in France. Having graduated from some of country’s most elite institutions, Macron worked as a banker and entered politics in 2012 as a chief advisor to then president François Hollande. He served as Minister of the Economy between August 2014 and August 2016, before resigning to launch his own political movement with 200,000 adherents. Some politicians and analysts showed a dislike for Macron during his presidential campaign, but Macron showed them that it was not just media frenzy surrounding him.

Macron used his skills as an experienced banker to get ahead in the political landscape. And perhaps his strong anti-establishment message is what had helped him most in winning the presidency. Many analysts attribute Macron’s sudden rise to the population’s strong desire for a new face, coinciding with the unexpected collapse of his rivals from the traditional parties, especially the traditional right. Macron used the disappointment with the status quo and promised to change the existing institutions and bring a fresh perspective.

He is a big literature buff, and often quotes from poets in his speeches. Macron was described by his opponent François Fillon as a “spiritual guide.” Macron seeks to strengthen his position internationally. He has already visited Berlin to meet the German chancellor Angela Merkel. He faced many criticisms from the far right when he described French colonialism as a “crime against humanity.” Macron does not hide his private life and proudly shows off his wife, Brigitte. The former teacher is 24-year-older than her husband, and their relationship has faced much scrutiny. But Macron brushes all the criticism aside and they carry on as usual.